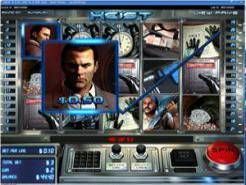 Play Now
Few games we have seen online have graphics quite as impressive as Heist. You would think for a moment some of it has been filmed, but it hasn’t. The animated scene at the beginning sets you up for the heist that is to come, and is the main focus of the game. Let’s check it out.

How many reels and paylines are in this game?

The game has five reels, as you might expect. There are 30 paylines here too, which means you have a nice chance of winning more than once with a single spin.

What can you bet on it?

Your smallest bet on this game is two cents per line. You can increase that to a dollar though if you want to. There is also the option to increase the number of coins you play per line, up to as many as five each time.

Which special symbols can you look out for during game play?

The drill is the scatter symbol in this game. This triggers a win when you have three or more. You will also want to look out for the glass cutter. If you get three or more, you’ll unlock a special prize. This could be access to the bonus level, free spins or a bonus credit prize. C4 also pops up on the reels. When this happens on the center space in the center reel, it explodes to unlock a reel that goes 2x wild. This can also lock in place for an additional spin if you’re lucky.

Does Heist have a bonus round?

Yes it does, and it predictably requires three vaults to unlock it. You will be the thief in this round, trying to gain access to the vault without the detective tracking you down and arresting you. You can choose one of several entrances to the vault to see how successful you are.

Heist is a great game that brings together many different features. You could get some cool prizes while you play, and with the added bonus of a second screen bonus level too, the storyline plays out as you play. If you’ve yet to play Heist, we would definitely encourage you to give it a try. Some casinos do have free play mode so you can practice, but you can still play in real money mode if you want to try your luck.
Play Now

Where to Play Heist Slots