Cosmic Quest: So Good it Got a Sequel! 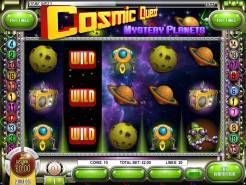 Play Now
Remember Cosmic Quest? Did you know this slot game has a sequel? It’s called Cosmic Quest II: Mystery Planets . The game screen is just as thrilling as it was in the first – perhaps even better. So let’s take a look and see what this particular game has in store for us.

How many reels and paylines will you find in Cosmic Quest II: Mystery Planets?

This game boasts five reels in action, and there are 20 lines to play with if you wish to cover all of them.

What can you bet on the slot game?

This game has a fairly small array of coin values to choose from. You’ve got one cent at the lowest end of the scale and a quarter at the upper end. You do however have the chance to wager from one to 10 coins per payline.

What special symbols are in use?

The yellow spaceship is the expanding wild. You can also look out for the jackpot icon, as this is depicted by the jackpot jetpack symbol. It’s red with three canisters on the jetpack. You’ll get free spins with these icons if you get at least three of them. For three, four or five respectively, you’ll get 10, 25 or an amazing 50 free spins. The prizes in these spins will be doubled.

Does Cosmic Quest II: Mystery Planets have a bonus round?

Yes there is, and you need the scatterstronaut to unlock it. This is obviously an astronaut, and three of them will trigger the bonus round to begin. Unlike many other bonus rounds you may have played, this relies on your skills at steering a spaceship through a cave. The further you can get in your ship, the bigger the resulting prize will be. It certainly makes a change from the usual kinds of rounds you might play.

This game is a great follow-up to the first Cosmic Quest game. Since it has become quite popular, will we see a third game in due course? Only time will tell, but there is certainly plenty more that could be enjoyed if the software providers did want to take the story further. With planets, spaceships and much more besides, this could be the beginning of an extensive series of games. Would you play another round of Cosmic Quest in the future – especially if it got better and better still?
Play Now